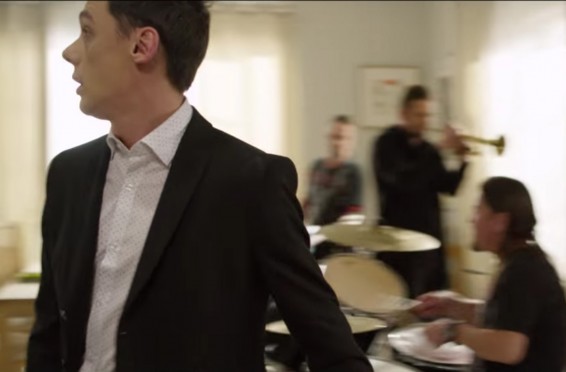 On Valentines day we did The First Live Streamed Music Video Production in Romania. Blitz Technology teamed up with VUNK Music Band to Stream Live on Facebook the production of their new music video.

What do you mean live streamed music video production?

A camera man filmed the whole music video just in one shot. There were no multiple cameras, no multiple shots, no editing or cuts, no mistakes. Blitz Technology helped to Live Stream this production on Facebook while the actors had only one chance to make this happen.

How was this possible?

Blitz Technology provided The technology behind this Live Stream and the team made this project one of a kind. The feed from the camera operator that was filming the whole music video, got transmitted to Facebook, while maintaining the quality and guaranteeing the best upload speed. At the end of the music video, we switched back to the presenter so he can introduce the team and give a round of applause to the actors.

What does this mean for marketing?

We entered into a new area of technology. One of fast pace, where consumers, fans and clients need fast, reliable and premium quality content. The VUNK fans where instantly hooked and intrigued with this new concept of filming and participating in the production. At the same time interacting with the fans builds up immense opportunity for building the brand and keeping the community engaged in conversation.

The entire video got more than 200.000 views (4.4K likes and 1.2 shares) only on the VUNK’s page just 8 days after we made the Live Stream. You can still see the video here on their Facebook Page or YouTube bellow. This numbers are only the beginning, as the video made its way across social media fans and news.

VUNK also gave clues in the video for an upcoming concert. This encourages the second view of their video, as fans needed to see the clues again.

What does Live Stream bring?

As we see more and more creativity building, Blitz Technology will continue to bring the best quality for it’s clients and encourage them to stream good content on Facebook, YouTube and other platforms.  The best advantage of this project is interacting with fans via comments. This was never possible before, to bring the community and take part of the production of one music video. It seems like Live Streaming will continue to grow exponentially through 2017.

This is the Music clip that got Live Streamed on Facebook while it was produced:

Keep up with our projects or contact us to tell us about yours.